We Check More Than Just Your Thyroid and TSH Levels

Serving patients In person and via telemedicine

Thyroid Testing and Treatment at the Hormone Center

It is estimated that 60% of those with low thyroid, also known as hypothyroidism, are undiagnosed. At the Hormone Center, we offer accurate thyroid gland function testing to check TSH levels and determine thyroid conditions including hypothyroidism and hyperthyroidism, offering treatment and natural remedies to sort out imbalances. Start to feel better by getting your thyroid health checked today!

It is helpful to many patients looking for thyroid problems treatment to understand how the thyroid gland works. The pituitary gland sends a signal to the thyroid gland to make Thyroid Stimulating Hormone (TSH). A healthy thyroid converts the TSH to T4 which is a storage hormone and the most abundant. The T4 is meant to convert to T3, the most active thyroid hormone. In any situation where your body needs to conserve energy, such as emotional, physical, or biological stress, excess T4 converts to the inactive Reverse T3 (RT3) as a way to clear out the extra T4. Problems can arise if your body produces excessive amounts of RT3. If you are on a T4 medication (e.g. Synthroid) the possibility exists that you will make too much RT3. Many patients who are on T4 medication do not have a T4 problem. They have a T3/RT3 conversion issue. Giving patients a medication like Synthroid (T4) when they don’t have a T4 problem may make patients feel worse. The only commercially available T3 is a synthetic version which is immediately released, is absorbed quickly and may result in higher than normal T3 levels, such as an increased heart rate. However using a slow-release T3 customized compound can avoid adverse reactions.

Why Many Thyroid Tests are Inadequate

The TSH lab test is the most common test for a thyroid disease. Only running a TSH test may be inadequate and may serve to exacerbate the patient's thyroid condition because it can provide false indications of the true problem. Testing TSH levels, while important, is only the “tip of the iceberg”. A TSH test may come back “normal” or “in range”, but it may not be normal for you as you may have lived life on the upper end of the range, but now find yourself on the lower end. Many physicians do not make this distinction when looking for thyroid disorders. Instead, the goal should be to optimize thyroid levels for each individual patient versus attempting to hit general population levels. We not only test TSH levels but also T4, T3, and Reverse T3, in addition to TPO (Thyroid Peroxidase) anti-bodies. High levels of TPO anti-bodies may mean the patient has an auto-immune disease called Hashimoto’s, where the body attacks the thyroid. Hashimoto’s may not show up on a regular TSH test. It is not enough to simply order the appropriate tests when treating thyroid issues. Medical providers must be trained on how to interpret the results in combination with a patient’s symptoms. Additionally, the provider must know how to customize prescriptions for maximum patient benefit, and offer natural thyroid treatment options as well. 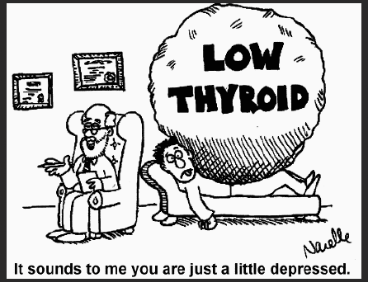 I had suspected for some time that my thyroid was the cause of the my symptoms-- but every time I had tests done, the results came back as 'in range'. It wasn't until I found The Hormone Center that I learned how much more there was to know about how my thyroid works. I'm so thankful I trusted my intuition and kept searching for answers.